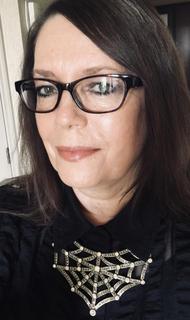 Her publishing credits include feature articles in both The American Kennel Gazette and Dog World magazines.

She holds a BA in English and an MS in psychology. At one time, she worked as a top-secret contract programmer/systems analyst for the Army.

A native Californian, she currently lives near Tulsa with her New Yorker husband.

Walking the Wyrd
When widow Audrey Galen buys a key from a strange old woman, mysterious forces come to claim her.